In the second quarter, very strong base effects were observed in the powerful year-on-year gains in retail sales. They peaked in April, since the activity related to the lockdown was the lowest in April 2020. Although the unemployment rates remain higher than in the same period last year, consumption has been helped by postponed demand and aid programmes, which have saved a large part of the economic fabric from irreversible decline.

May and June also witnessed high nominal sales growth figures, however, they were lower than in April. In the US, stimulus checks for individuals paid directly to a bank account have caused an unprecedented destabilisation of the labour market, where (despite record numbers of job vacancies reported by employers), there have been few people willing to work. Data from the last week of June show the first signs of this trend reversing towards normalisation. 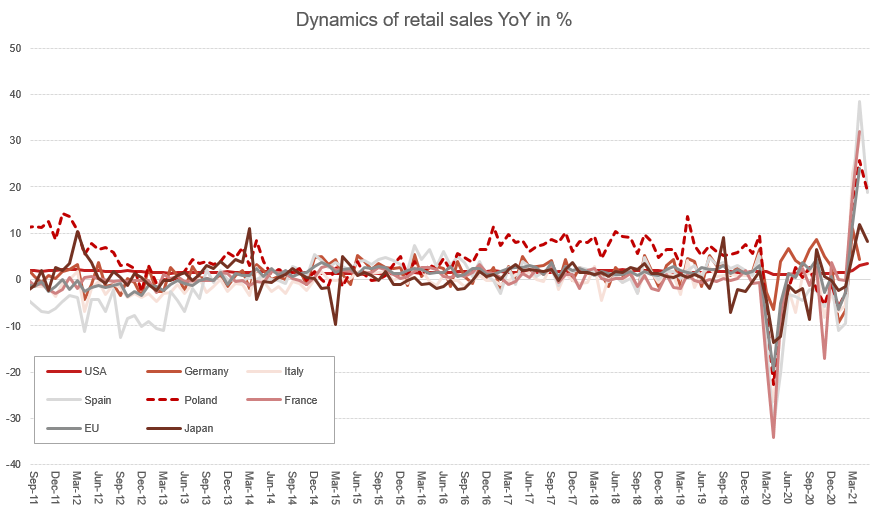 A similar trend to that of retail sales was also evident in the dynamics of industrial production, which in YoY terms rose the most in April to also record impressive nominal figures in May, which were, however, lower than for April. In general, the reported data were close to expectations, although there were some minor surprises both to the up and downside. In this context China should be mentioned as it performed significantly better than the US or Europe in 2020 (in terms of economic data). Currently, data from the industrial sector have been systematically worse than expected practically since the beginning of the year (a similar situation, apart from a strong upward surprise in March, also affected retail sales). A good situation in the industrial sector is also confirmed by the capacity utilisation rate which has grown dynamically and is close to the levels from the beginning of 2020. 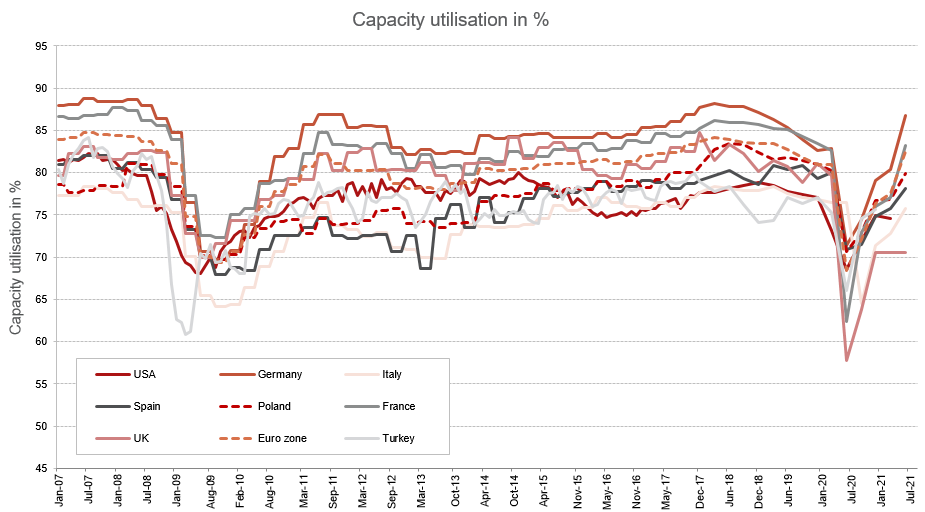 As a result of the impact of the three aggregate growth drivers described above, GDP growth dynamics continued to improve. The GDP growth readings for the fourth quarter of 2020 and the first quarter of 2021 were generally better than expected. These results, combined with an aggregate view of macro data indicating that for G10 and emerging market (EM) economies, the data are better than expected (except for the US, where they converge, and China, where they are worse than expected), lead to an upward revision of growth forecasts for the whole of 2021. In contrast, a stronger-than-expected exit from the pandemic period this year automatically implies (assuming a return to normal) some stabilisation and a reduction in dynamics in 2022. 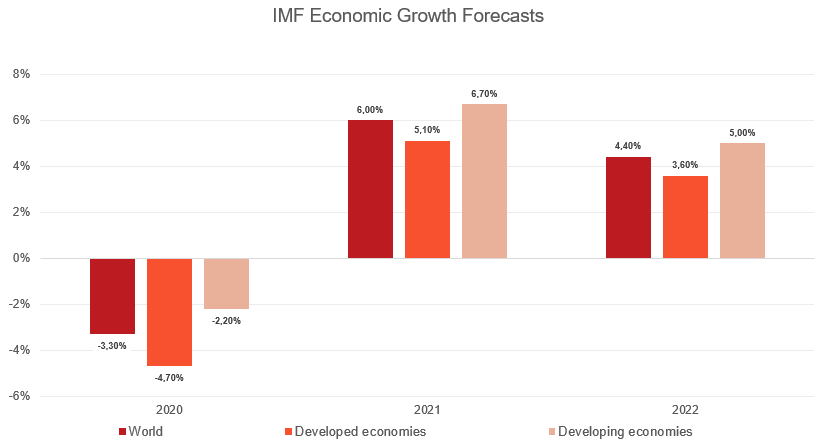 Since February 2021 the leading indicators have been systematically growing. Global leadingi ndicator for the  manufacturing ended the first half of the year at a new maximum. Among the major EU economies, Germany and Spain have seen the indicator’s growth since May. The levels for France and Italy have been only slightly lower. However, there are also some less positive news – delivery times in the supply chain have extended to record levels, followed by production delays and a very dynamic increase in prices. In Poland, the indicator reached its highest value in the history of the readings.

As far as the overall synthetic indicator of the business climate in Poland is concerned, the good situation in industry is confirmed by the “manufacturing” component. The services sector faces a worse situation, but it has been improving. By contrast, in the US (which, due to its much more flexible economy compared to Europe, have dealt with the effects of the pandemic more quickly), it seems that the maximum values are behind us and the process of stabilising the economy after a period of heightened volatility has begun. In the base scenario this will involve a slow decrease in the indicators’ values, but to the levels still showing a good business climate. It should be good, but not extreme. In the global context, however, the data from China, which recorded a decline and is balancing in a rather uncomfortable zone close to the levels of the downturn, are somewhat worrying.

After the broader reopening of economy, also the services sector has started to rebound. The forward-looking indicators have entered the economic upturn zone, which is particularly important for maintaining a good pace of economic growth, as in developed economies it is the services sector that generates the largest part of GDP. 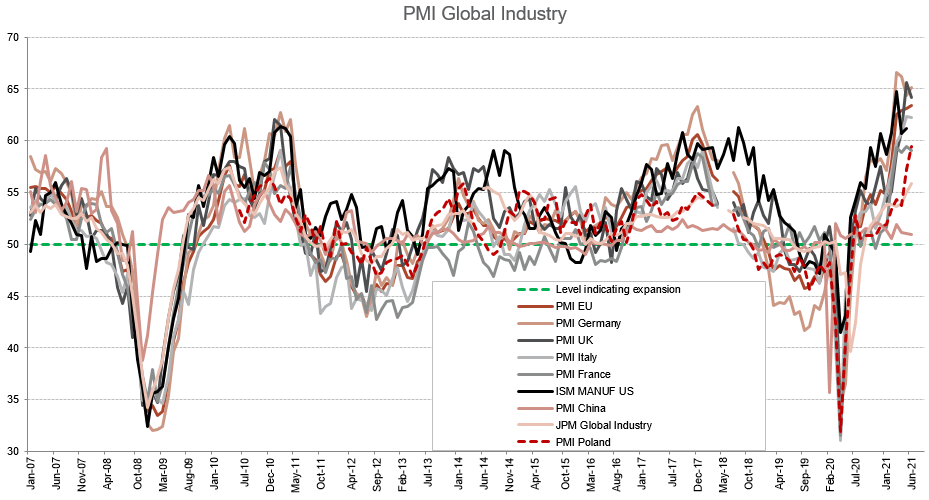 Higher than expected global demand in both the services and goods sectors, dynamic growth in the monetary base and problems with supply chains leading to a “regional” decline in global supply, result in positive demand gaps, pressure on resources and in effect cause an increase in producer prices (PPI). In the current environment, these increases can be relatively easily passed on to consumers, which also results in increases in consumer price indices (CPI). The most popular view is that elevated levels of inflation are temporary (which may be confirmed when comparing expected inflation to current inflation). However, the most important question for the second half of 2021 is, whether, once the growth dynamics have calmed down, the prices will return to the levels indicated by the targets of central banks or they will be in fact stable, but higher than those targets. The dynamic increases in inflation levels have awakened market expectations of interest rate rises and forced the monetary authorities to address this issue. An important factor differentiating the current inflation episode from the earlier episodes are asset purchase programmes launched in response to the crisis and on a big scale. This additional element marks a logical path for potential interest rate rises: first the QE reduction, then rising  interest rates. For the time being, the most important central banks (from the group of developed countries) have started to indicate the need for potential discussions (e.g. the famous “we were talking about talking about” from the last FED meeting), but some institutions (mainly from the group of developing countries) have already taken the first steps in the fight against inflation and started to raise interest rates. The examples here are Hungary, Czechia, Mexico and Russia. It seems, however, that with a very high level of debt and the markets' dependence on cheap money, the most likely scenario is a slow increase in rates (paradoxically not necessarily preceded by a reduction in QE) in anticipation of a calming of the price growth dynamics. This should still result in negative real interest rates (interest rate – inflation <0), although probably at a slightly higher level than at present. 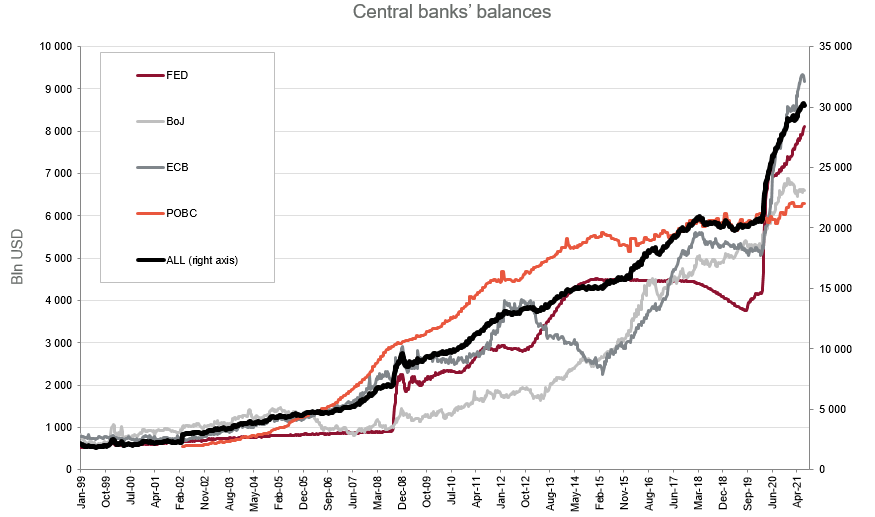 As a room for manoeuvre to further support growth by central banks is rather limited taken into consideration historically high debt levels, governments are seeking to stimulate economies through fiscal policy measures. The toolkit and approach used will probably continue to be based on the MMT (Modern Monetary Theory) assumptions and cooperation with central banks. Budget deficits are likely to be maintained at high levels and states will, on the one hand, “oil” the economy with budgetary measures or credit subsidies and, on the other hand, “draw back” money by increasing or introducing new budgetary levies (taxes, contributions, etc.) and tax reforms aimed at increasing budget revenues. 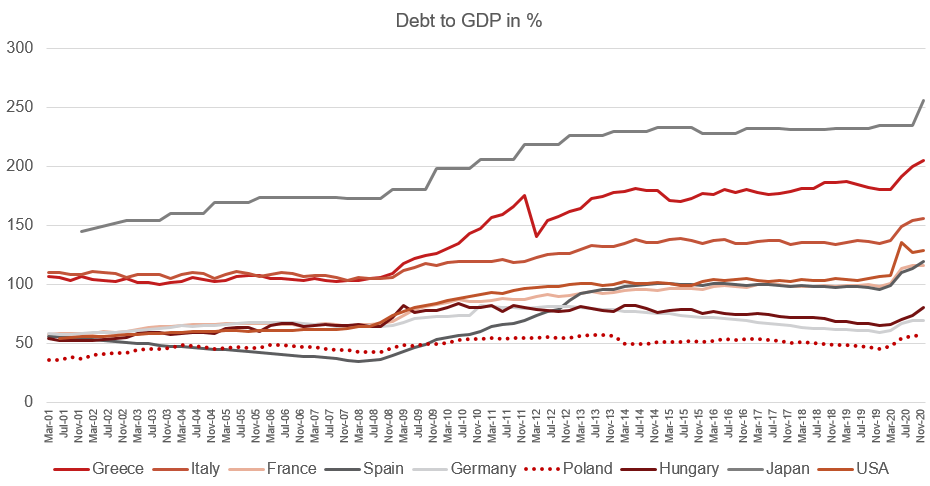