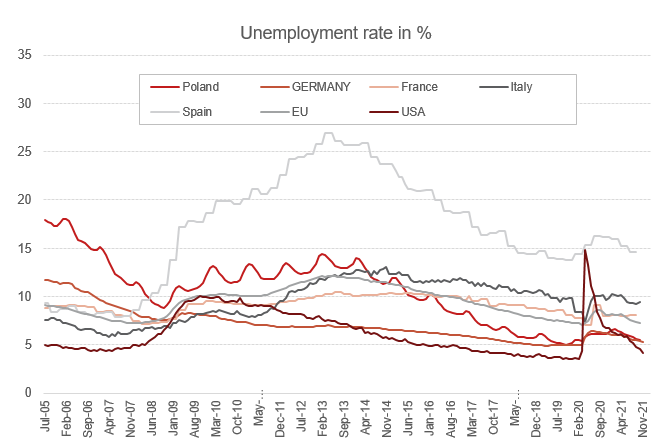 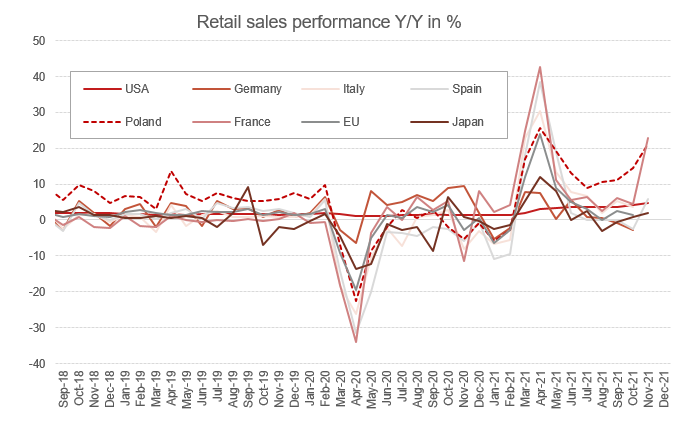 The retail sales performance in individual economies in 2021 was very volatile and susceptible to strong base effects. At the beginning of the year, the incremental increases in retail sales y/y were negative, and they shoot up to two-digit figures in Q2. Their peaks fell on April (as April 2020 was the restrictions peak month, therefore, the highest deferred demand emerged in April 2021), and then were equally dynamically decreasing ever since. In Q3, the impact of base effects was not that prevailing anymore, and the data started to indicate instability of consumption in consequence of a number of post-pandemic factors such as, for instance: expiry of the deferred demand, change in consumer habits, mixed availability of goods and services, or of other barriers for instance in the holiday travel business. In Q3, the retail sales performance in different economies was showing a very similar pattern, but different levels. Q4 was very mixed. November was again showing signs of the base effect due to more restrictions having been introduced in November 2020 (hence the high performance dynamics in Poland and France), whereas the demand in December 2021 was on one hand influenced by restrictions introduced as a result of a new virus variant and on the other – by the effect of Christmas shopping and the increased seasonal consumption (although German retailers, for instance, claimed the Christmas period to be “a catastrophe”). 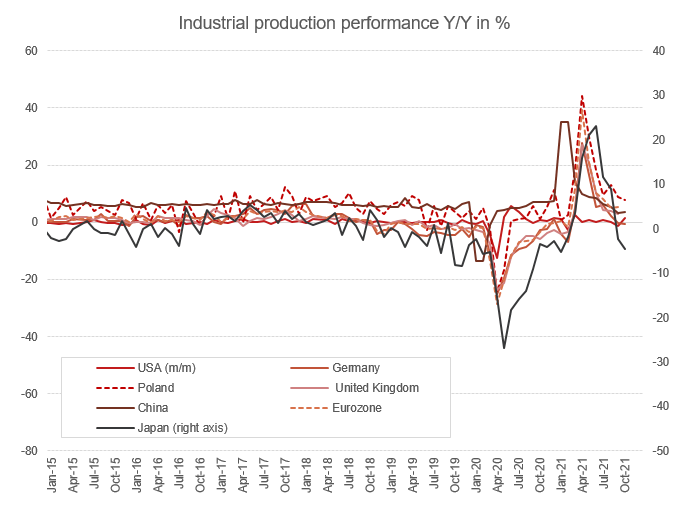 The industrial production performance (in constant prices) was characterised in the first half of 2021 by a similar pattern as the retail sales. In January and February, readings for many economies were being either negative or close to zero. In March (once the restrictions were relaxed), the first base effects started to show, while the production incremental growth began to record two-digit levels reaching peak levels in April. Since that time, the performance started to go down regularly to reach again negative or close to zero levels in some economies at the end of Q3 (Japan, USA, Germany, France, Spain). Poland showed itself from a very positive angle against others. During that time, in all economies manufacturers were pointing out to supply chain problems (delays or shortages of raw materials and components) and price increases, which resulted in failure in meeting the demand in full and in delays in production, thus leading to further price increases. In October, businesses were informing that demand was starting to react to the price increases, whereas in November it was pointed out that the volume of advance purchases increased. 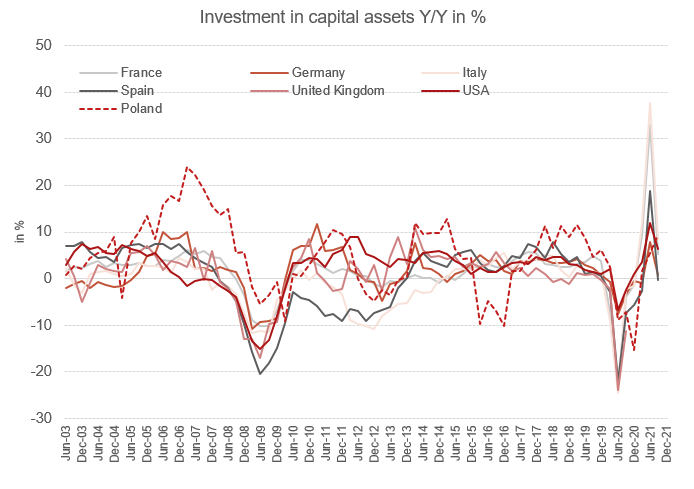 A returning global demand, high usage of production capacity and rising prices constituted an impulse for increased CapEx outlays in the first year-half. Their performance, similarly to production and retail sales, did not manage to avoid the base effect. In Q3, the capital expenditure performance decreased and diversified. The CapEx value in the major eurozone economies was as follows: it decreased in Spain, it was very low in Germany, whereas in France and in Italy it was relatively high. Poland also showed itself from a positive angle against others. 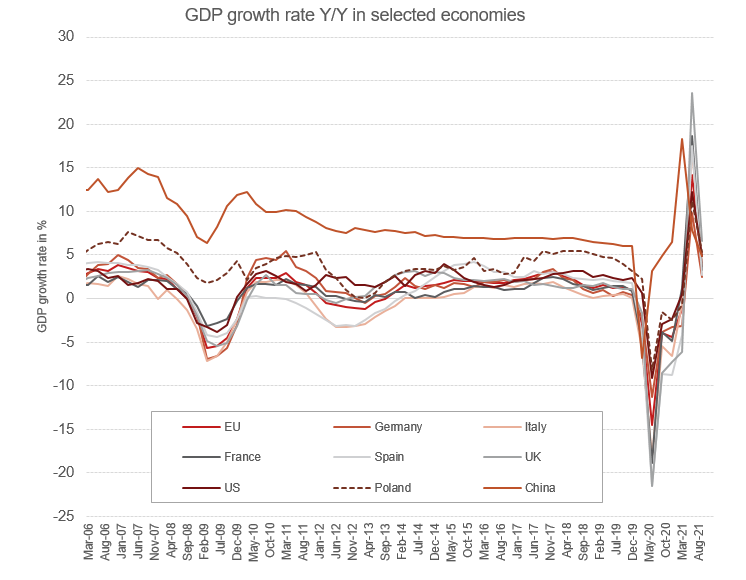 The very similar performance of the above categories, influencing the economic growth, generated a similar course of the entire aggregate i.e. the Gross Domestic Product performance. Readings of the GDP increases for the individual quarters were higher than expected (although their values were falling, normalisation followed once the base effect period was over), while the economic growth projections for 2021 were revised upwards. The recent IMF projections from October 2021 indicate a rise of the world economy at 5.9%, and the developed economies should grow at 5.2% while the developing ones – at 6.4%. At the same time, the higher than expected economic growth in 2021 means a higher base for 2022 and, therefore – a lower growth rate in 2022, although still above the potential. The 2022 projections are likely to be revised downwards due to the spread of a new coronavirus variant. 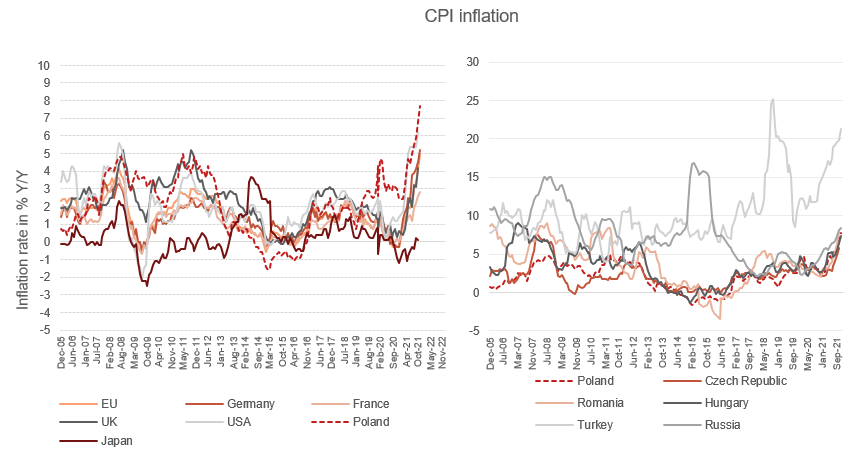 2021 was a year of the highest and fastest growing inflation levels in many years both with regard to aggregated producer prices (PPI – Producer Price Index) and aggregated consumer prices (CPI – Consumer Price Index) as well as with regard to base inflation. This situation was influenced by the global demand being higher than expected (both in the services and goods sector), a dynamic increase of the monetary base (the impulse was not cut back in time) as well as problems with supply chains leading to a reduced global supply. All these factors led to positive demand gaps and pressure on resources. In the situation of increased and unmet demand, manufacturers are able to shift their rising costs onto consumers. The drastic rise in fossil fuel and energy carrier prices, which had been a consequence of a number of causes, including geopolitical ones, constituted an additional factor that hit the stability of prices in the second half of 2021. At present, talking in general terms, we can say that the increased inflation levels and the inflation-driven surprises are going to be present in the economy also in 2022. Yet, the inflation level may vary significantly by individual groups of countries – also due to attempts being taken to mitigate the price rises by reducing some taxes. 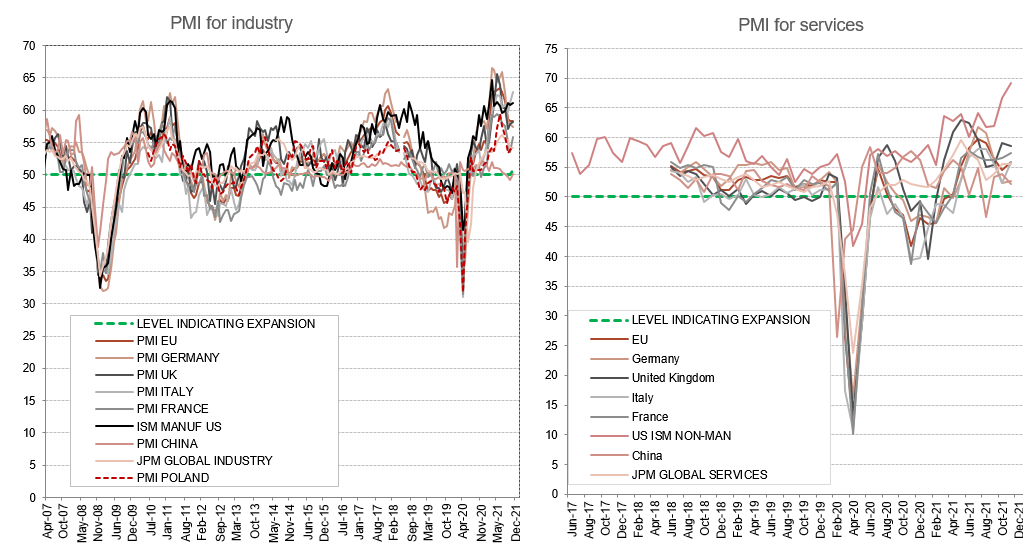 PMI for the industry sector reached their peaks in Q2 2021, and then started to fall. Their drop showed a certain normalisation since their levels at the year-end confirmed the economic trend to be strong, and they also provide a positive outlook for 2022. Manufacturers, however, are likely to suffer similar problems as in 2021. PMI for the services sector (except for ISM non-Manufacturing (USA)) also reached their peaks, yet, with a certain shift compared to those reported for the industry sector, and with slightly lower figures. The later decreases in figures were also showing signs of normalisation, although the services sector had it much more difficult to come out from the pandemic-driven turmoil (due to the volatile situation marked by restrictions and the new pandemic waves) than the industry sector. Due to the high infection rates, the year-end saw some deteriorating sentiments, however, the services sector already learned to an extent how to operate during the pandemic. That is why the economic trends are still showing strong figures. Of course, we should not forget about large differences recorded between individual sectors.

In Poland, the general economic climate indicators, calculated and published by the Statistics Poland (GUS), recorded in the broadly understood processing industry and construction, trade and vehicle repair sectors, were reporting negative figures throughout the year (save for June and July for the last one), thus indicating relatively poor sentiments. The financial and insurance services sectors reported positive indicators, thus pointing out to improvement of sentiments, although they were weaker compared to the pre-pandemic period. The second half of the year was also better for the transport industry, however, the sentiments started to deteriorate from July. The accommodation, catering as well as the real estate market closed the year with negative figures. 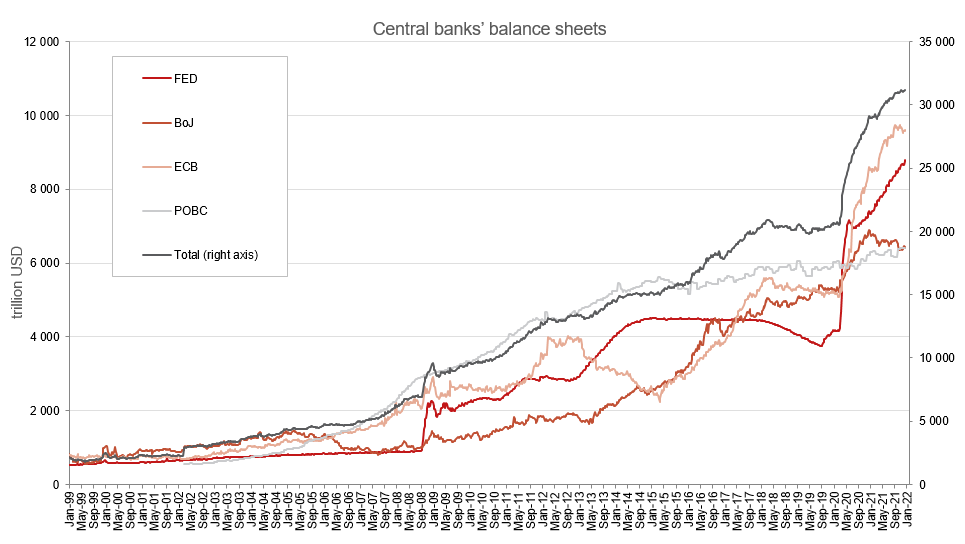 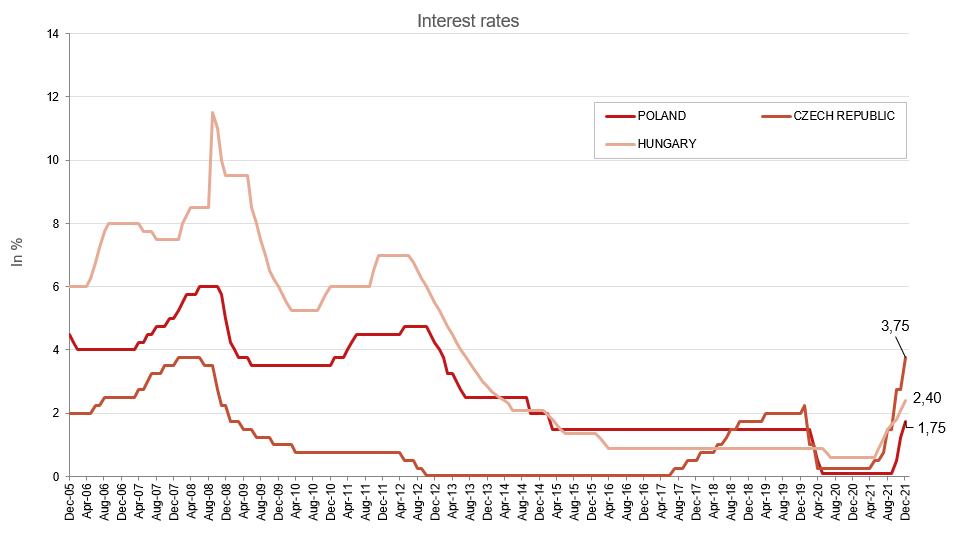 In the rising inflation environment, the major central banks from the developed countries were for a very long time maintaining a narrative of a temporary nature of the inflation. This situation started to change in Q3, when they finally realised that inflation was not temporary, and will remain above the central banks’ goals for a longer time. Then, talks on a stricter monetary policy started. This change of the narrative preceded the FED’s first move, which announced a start to limiting the asset repurchase program, to fully end it in 2022, and to increase interest rates first time in the new cycle. EBC has adopted a milder approach to its monetary policy, and has so far been reluctant to increase interest rates. A strict monetary policy reflected in continuous interest rate increases was conducted by central banks from the developing countries, including those from the Central and Eastern Europe. The National Bank of Poland (NBP) was for a very long time holding back the decision to increase interest rates, yet, took the first step to this end at the beginning of October. The inflation “chasing” adopted in the context of new power and gas prices announced for 2022, is reflected by the next meeting of the Monetary Policy Council (RPP) having been brought forward from 12 January to 4 January 2022. However, irrespective of the central bank, the central banks’ rates, after deducting inflation levels, are very likely to remain negative.

We are still maintaining our observations from mid-2021 that at the times of limited possibilities of supporting the continued economic growth by central banks and of historically high debt levels, governments will attempt to stimulate economies through fiscal policy measures. The toolkit and the approach used will probably continue to be based on the MMT (Modern Monetary Theory) assumptions and cooperation with central banks. Budget deficits are likely to be kept at high levels, while states will, on the one hand, “oil up” the economy using budgetary measures or credit subsidies and, on the other, “draw back” the money by increasing or introducing new budgetary levies (taxes, contributions, etc.) as well as tax reforms aimed at increasing budget revenues or redistribution of potential new savings to boost consumption. 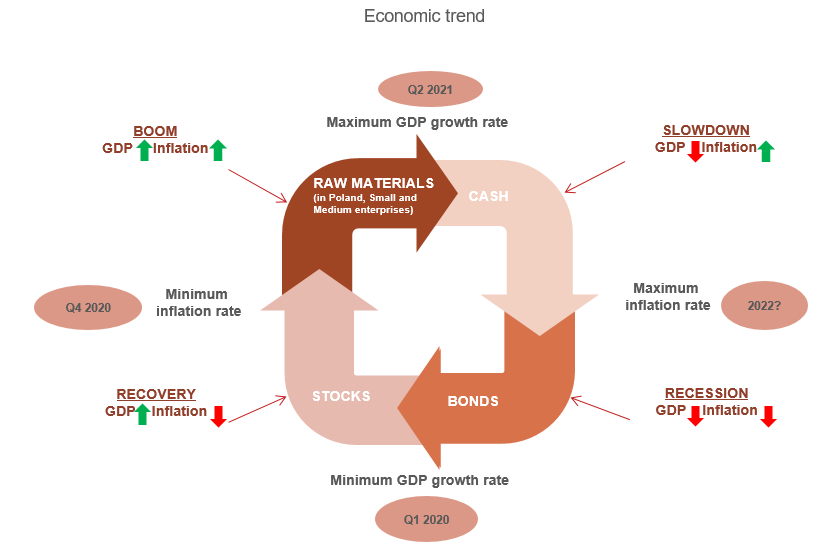 Analysing the above data and taking into account lower economic growth forecasts for 2022 as well as the continuous inflation rise, it can be concluded that the current situation best resembles an inflation slowdown phase. This phase, however, is/is going to be quite unusual as, this time, the central banks’ policy is not going to substantially curb the economic growth, real interest rates are likely to be negative, while the economic growth rate will oscillate closely to or above its potential.

Previous Article
Investment outlook for 2022
Next Article
ESG and investing