The management of Generali Investments TFI has prepared outlook for 2022.

2022 will be a year of active management, in which selection will be more important for fund performance that allocation.

Global economy is entering the third year of the pandemic in its late expansion phase. We will see a slowdown in GDP growth rate in individual countries. It will be at significantly lower levels than in 2021, which was characterized by a strong rebound after 2020, burdened with huge costs to fight COVID.

Our country’s economy will also fit into this trend that is so typical of the expansion phase. One of the key components that has a negative impact on GDP growth rate in Poland will be the effect of enterprise inventory levels expanded in 2021 due to inflation concerns.

Interest rate increases will have substantial impact in the years 2022 and 2023.

Initially seen in many markets as a temporary phenomenon, inflation has exceeded the forecast levels.

With the anti-inflation shield, the peak of inflation effect in our market will be flattened and stretched out over a longer period of time, with the highest readings expected in June. Thus, high interest rates will have to be maintained for a longer period than would have been the case without such a shield.

2022 definitely marks the end of the era of cheap money. Globally, we are observing a division into two worlds in terms of monetary policy and inflation. Central banks in emerging markets have been into the monetary policy normalization process for many months, while the developed markets have just embarked on it.

The ECB and the FED are now changing the tapering pace of security purchases. Rate increases are on the horizon (the Bank of England started it in late 2021 with an increase by 15 bps, the market expects the FED to raise rates three times in 2022 by 0.25% each time, and the ECB once by 0.10%).

High inflation is a global phenomenon (except for Japan and China), although the causes of inflation are different for developed and emerging economies (that is why the emerging markets had to start raising the rates sooner). The base effects will diminish, but the phenomena that caused inflation (inter alia the supply chain disruptions which led to increases in the prices of raw materials and semi-finished products) will be disappearing at a slower pace.

As announced by the ECB, we are about to experience a longer period of low interest rates in the Euro zone. Unlike the US, in the Euro zone, base inflation (i.e. inflation except energy and food prices) remains at a low level, which is why the ECB can afford to postpone normalizing its monetary policy.

Another important phenomenon will be the end of the so called ‘printing money’. Central banks’ balance sheets have expanded significantly after pandemic interventions, and in the current macroeconomic situation we should not expect any already known operations to reduce them. The banks are more likely to keep the bonds they have purchased until their maturity dates.

De-synchronization of monetary policies in the developed and emerging markets will create an opportunity for massive inflows to the emerging markets. This scenario is highly likely as emerging markets started the rise cycle before the markets in G-10 countries. With similar term bonuses (the yield of 10-year minus 2-year bonds), they are characterized by a considerably higher yield, which after peak inflation readings, allows for some optimism about strong drops in yields, while bond coupons collected are still high.

This also applies to our region (CEE), where the key is for inflation to pass the peak point. Performance can be additionally boosted also by the appreciation of local currencies, which have weakened despite the interest rate bonus being built against the developed countries.

Forecasting the outlook for the Polish debt market, we are optimistically looking at the inverted yield curve scenario that is currently materializing for the Czech Republic. We are awaiting a moment in the coming year when, with an active management model, it will be possible to achieve very attractive rates of return also on the basis of fixed coupon bonds. However, in the whole year perspective, we are particularly positively disposed towards variable coupon bonds, which should improve during the rate rise cycle, and their coupons should be renewed on higher and higher WIBOR 6M rates.

We also see a considerable opportunity to gradually change the perception of Polish treasury bonds among foreign investors (currently Poland has a historically low share of foreign investors in treasury bonds, the lowest in the CEE). This would have a very positive impact on return rates for those investing in this asset class.

In response to such market forecasts, we assume there will be a change in positioning within actively managed debt fund portfolios during the year. Apart from a change of allocation on Polish fixed-interest treasury bonds (probably closer to Q3), the rest of the CEE region should also be an attractive diversifier, alongside the emerging markets bonds, both in local and hard currencies (USD, EUR).

2022 will be another year characterized by investments in risky assets. The moderate path of interest rate increases adopted by the FED and the ECB will be neutral from the share markets’ perspective.

Economic stimulation programmes will be a positive stimulus for stock exchanges. Worth USD 1.8 trillion, Biden’s plan is currently under consultation in the US. The European Union plans an investment package of EUR 750 billion to revive the economy in the years 2021–2027.

We are entering an economic expansion phase with enterprises enjoying good financial standing, additionally supported by the weak position of the zloty relative to base currencies (which supports exporters). The shortening of global supply chains should also bring benefits to Polish companies.

Consumption will be the main component to drive GDP growth. The purchasing power of Polish consumers will grow thanks to the expected growth of wages above the level of inflation. We are also waiting for the positive effects of introducing the Polish Deal.

Despite its negative impact on the moods of consumers and enterprises, the pandemic will have a limited impact on the real economy. Challenges to be faced by companies will include the rising costs of payroll, raw materials and energy carriers.

When analysing the financial standing of Polish companies we can see a number of factors that encourage investments. We can see that operating margins have been the highest since 2007. Companies have used the period of the economic boom to reduce their debt level. Good financial standing should translate into continued investment processes, acquisitions or dividend payments, and purchases of own shares. In their forecasts, companies assume further profit growth.

In 2022, the Polish stock exchange will be supplied by inflows from Employee Capital Plans (approx. PLN 2 billion) and from Open-Ended Pension Funds (OFE) (the balance of flows to the Social Insurance Institution (ZUS) of PLN 3.6 billion will be covered by dividends of approx. PLN 5 billion).

We also positively assess the prospects for investing in American and European companies. We take a particularly positive view of the Quality segment companies.

A growing group of investors declare to include ESG factors in the selection of assets and to increase the share of those products in their investment portfolios. This is confirmed by a dynamic inflow of resources to funds based on the sustainable development concept, which increased their assets four-fold over a two-year period.

High inflation environment and real rates remaining negative, and even the stagflation concerns are arguments for including gold in investment portfolio composition. The rises announced by the FED should be already discounted in gold prices. Physical gold purchases by central banks, jewellers, as well as investment demand have a favourable impact on the demand side. The profit to risk ratio on USD, whose position strengthened in the previous year, should also be an argument for investing in gold. Low volatility and correlation with other asset classes make gold a good diversifying element in an investment portfolio. 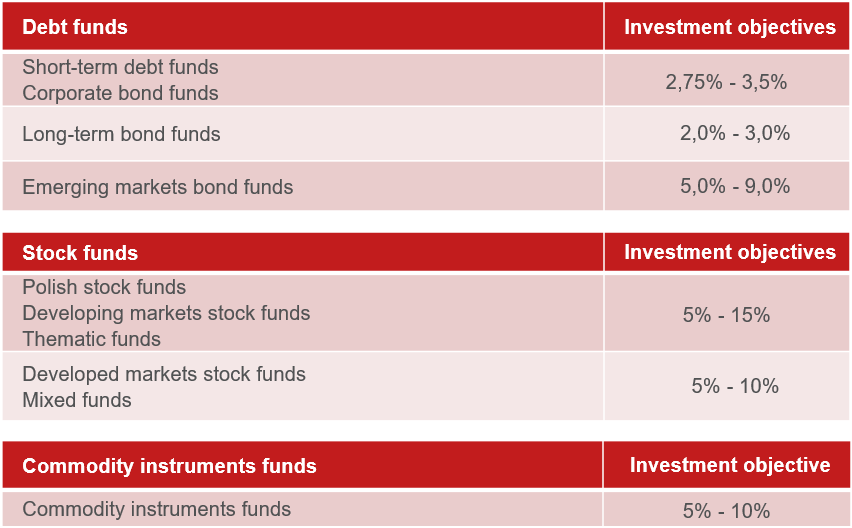 We have prepared this document for informational and educational purposes. It is not provided as part of investment consulting, investment recommendation or any other financial advisory services.

Neither the Investment Fund Company nor the investment funds guarantee that investment targets will be met. Participants need to be prepared for a possible decrease in or a loss of the funds invested. Handling fees and due taxes might be deducted from the results. Taxation depends on the client’s situation and it may change in the future.

The Investment Fund Company assumes no liability for the adverse effects that the direct or indirect use of the content hereof might have.